Giving girls a future that isn’t “set in stone” 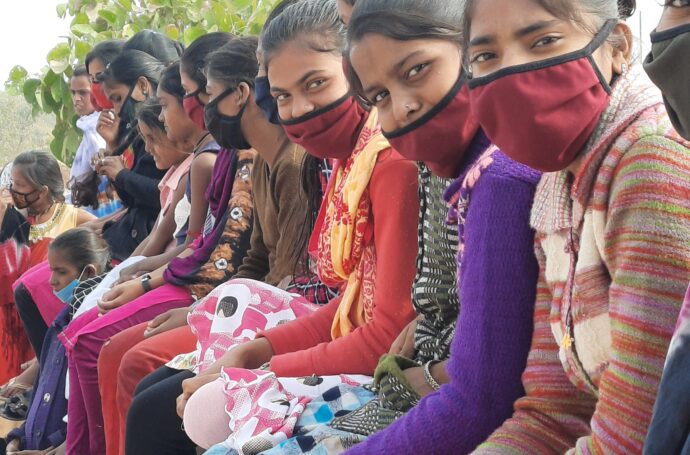 No Child Left Behind: helping to expand the life opportunities of adolescent girls.

A major focus of the work being performed by Manjari* within the community of Budhpura is in improving the health and prospects of adolescent girls.

Twenty-seven sessions have been delivered to adolescent groups in the last few months, covering topics such as literacy and entrepreneurship. One of the biggest benefits of this programme is in expanding the horizons of young women, helping them to see that their future is not “set in stone”.

Around 250 girls are involved in the programme; less than a third them are still in school, and some do occasional work in the stone yards. Some are, indeed, married. The legal age of marriage in India is 18.

Just as we explained in previous articles that child labour is a result of a complex situation, so is under-age marriage. It’s a concern that India as a whole has been trying to address for decades. The situation is improving and numbers are falling. In Rajasthan, however, the percentage of under-age marriages is much higher than the national average; Manish Singh, Secretary of Manjari reports that, in the Budhpura area, around 32% of marriages are under age.

The negative consequences of child marriage are many. Girls who marry very young have fewer educational opportunities, which affects their economic status and has a consequent impact on the economy of the country. Teenage pregnancy increases population growth because of the extra years of fertility. Young brides are more likely to be the victim of domestic violence and, according to the International Women’s Health Coalition, girls under the age of 15 are nearly five times more likely to die during childbirth, compared with women in their 20s; they are also at more risk of injuries resulting from pregnancy and childbirth.

The health of the children they bear can also suffer; often babies are underweight, and there’s a risk of their growing up stunted. All of this contributes to a cycle poverty, so there is enormous benefit to eradicating under-age marriage.

The work of Manjari and other agencies involved has to take into account multiple intertwining strands. “It’s how society perceives women,” explains Manish. “Are they considered a burden and responsibility, or are they people full of human potential?”

Poverty also plays a big role. “In India marriages are big business, so when an older girl is being married, a young girl is also married with her just to save money.”

One of the ways to combat early marriage is education. Women with twelve or more years at school are far more likely to get married in their twenties than those with no schooling.

It is, however, no coincidence that girls tend to drop out of school when they reach puberty. Menstruation is a major issue. and menstrual hygiene is another of the subjects covered in the sessions attended by the girls.

Some of the problems surrounding periods are cultural; when she’s menstruating, a girl can find herself subject to restrictions on behaviour and movement passed on by parents and siblings. Unsafe menstrual practices, such as reusing old cloths, are not uncommon in rural areas; they increase the danger of contracting reproductive tract infections, which can severely impact fertility later on.

The pandemic has in no way helped. There’s been a huge shortage of sanitary pads, with seven out of ten girls finding difficulty in obtaining them during lockdown, according to a study by the NGO Population Foundation of India last August. Interestingly, Poonam Muttreja, its executive director, was reported in the Hindustan Times as saying: “It takes tremendous convincing on the part of frontline workers to encourage and educate school-going girls to use sanitary napkins.”

Perhaps this has something to do with the financial aspect. Girls have been reluctant in the past to buy sanitary towels because of their high cost, but they’ve also been embarrassed to them in male-run shops.

This makes the sessions incredibly important in educating young women in menstrual health, but without access to sanitary towels, the education is in vain. Varun Sharma, Programmes Director of Aravali, one of the agencies involved in supporting the work of Manjari, said, “There is a very big issue of women not being able to access sanitary napkins. In the absence of that, their entire life suffers.”

A lack of sanitary towels leads to girls dropping out of school—one of the very things which can help their life chances. As part of the solution, Manish has got together four entrepreneurs, to procure good-quality low-price sanitary napkins. They have now started selling these to women.

It’s one small building block in giving adolescent girls life options which in the past weren’t even dreamed of. The self-help groups that are empowering women financially is another. There are other building blocks too. All are combining to create a structure that gives women a more recognized value in their community.

For more information on Manjari, see The NGO helping to eradicate child labour. 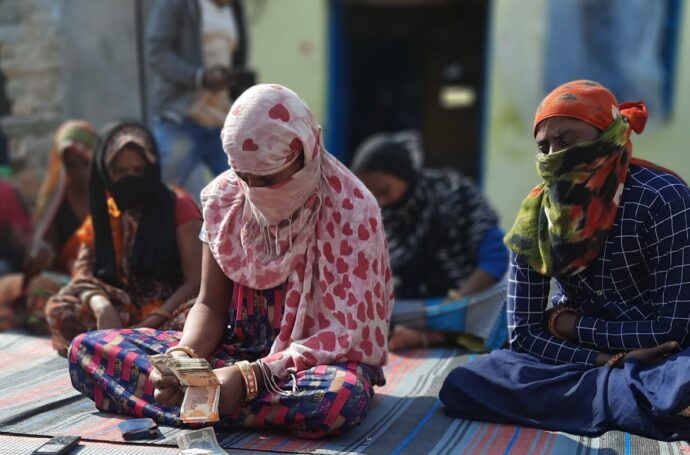 Financial empowerment is the key to increasing women’s influence in putting an end to child labour.

It’s not been easy in Budhpura—the centre of the cobble-making industry in Rajasthan and focus of No Child Left Behind, our project to support work to eradicate child labour in the natural stone industry.

India is reeling under the spread of Covid-19 and it is all the more to the credit of those involved that progress continues to be made, in such difficult circumstances, with the community projects that are so valuable in improving lives in the stone industry.

Manjari is the grass-roots NGO that operates in the heart of Budhpura with a team of fifteen who work directly with mine-workers, their families and local businesses.

Manish Singh is Manjari’s Secretary. “Wave one of the virus did not bring any difficulty,” he says, “but wave two has been disastrous. We do not have much liberty to move in the field, so whatever volunteers we have are managing the work.”

Although the ultimate aim of their work is to eradicate child labour, the success of this depends on improvements being made to many different aspects of life for those who live and work in the area—to health, education, and income, to name but a few.

Self-help groups have been a feature of village life for some time. Here’s one from 2015.

Enter Self Help groups. Over the past months, support has continued for these wherever possible. Whereas self-help groups in this country are initiated with many different purposes in mind, in India the self-help movement began with the focus firmly on women’s empowerment. “Given the socio-economic and gender disparities we have,” says Manish, “it was considered a tool to bring about change in the life of women.” This is exactly their purpose in Budhpura.

Varun Sharma is Programmes Director of Aravali, the agency that works at state level, acting as an interface between the government and grass-roots organisations like Manjari, while also helping the groups to develop their reach. “If children are at the heart of our project,” says Varun, “then protecting their mothers is also one of the key roles of our programme. That’s why we form self-help groups.”

In normal times, neighbourhood groups of around ten to twenty women meet every month to discuss matters of common interest. “When you bring them together, then the first thing is they must feel that they are a part of group, and the group has an agenda to fulfil. How long can you sustain these groups without an agenda?” points out Manish. “That’s a practical problem we have. So, we keep on taking up different activities.”

One of the most important items on the agenda is inculcating saving habits; economic empowerment has a major part to play in making women’s voices heard. “If they have a role in family decision-making because of the money they have, then it makes a difference to their position within the family,” says Manish.

“We’ve found economic empowerment is very much necessary when we work with women and children,” says Varun. “If she is earning but she’s not saving, at the end of the day a woman doesn’t have the power to negotiate, power to expand—so, she’s only an earner. An earner should be a decision-maker, I think.”

The effects are gradually being felt and Varun has noticed that in areas where women have become more powerful financially, female empowerment overall has been greater.

The dream is that, in giving women a voice and the information they need, women will be able to work together to resolve some of the issues they face—domestic violence and child marriage being just two.

Helping women cannot be done in isolation, however. Everyone in the community has to be brought on board, and the approach is always to be gender-sensitive. “When we say gender-sensitive,” explains Manish, “it means involvement. For us gender is something that involves women and men both. If you think you are empowering women, but the one who is holding the power is not being sensitised, then all your efforts are useless. It is the men who are holding the power.”

So, Manjari works with labour groups too. When these groups—largely made up of men—meet, Manish and his team talk to them, not only about labour rights, but about gender justice and their responsibilities as men in society.

“We work with men and boys,” says Manish, “so their perception of women is changed.”

Read more about the work of Manjari and what has already been achieved in Celebrating Budhpura.