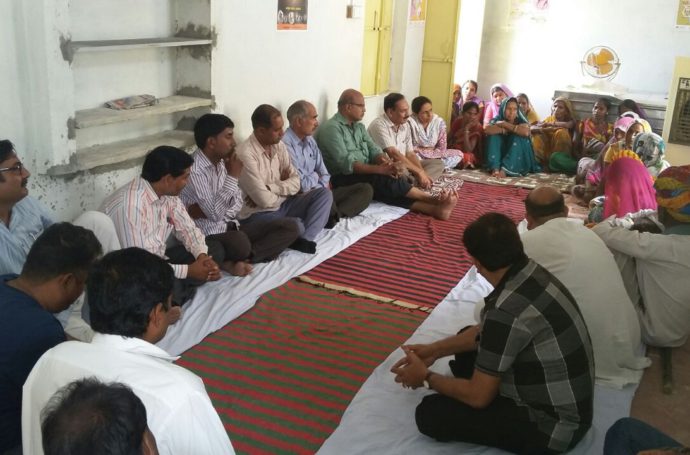 This is the story of Budhpura, a small village in Taleda Block in the Bundi District of Rajasthan. The main industry in this area is stone quarrying and the production of Sandstone setts.  It’s estimated that 85% of the population in this area work in or rely on the natural stone industry for their livelihoods.

There are many yards in and around Budhpura involved in the production, grading and sorting of Sandstone setts, 25 of the largest yards came together to form the cobble traders union.

Trust was gradually built on both sides though and eventually it was possible for Manjari and the project team to engage in open and frank dialogue with the cobble traders union. This gave Manjari the opportunity to talk about the long term implications of child labour

The first common myth to dispel was that poverty is not the main reason why children end up working.  There are many other factors at play.  If children could be put through education there were huge long term benefits for the child, the family and the community.  It was explained that employing children provided a tiny short term financial benefit but in the long term there was a huge cost as children would never have the opportunity to realise their full potential.  Its worth mentioning that the cobble traders are from the Budhpura community.  Finally they began to see the bigger picture, that child labour was bad for not only the children involved but for the community as a whole, their community.

Mr. Nissar was appointed by the cobble trader union to head up the new strategy of no children being employed in the cobble yards.

There is still a long way to go before we can eradicate child labour from Budhpura and the surrounding villages.  Without the support of the cobble traders union though, no progress is possible. We look forward to working with them to achieve our ultimate goal of eradicating child labour in Budhpura.