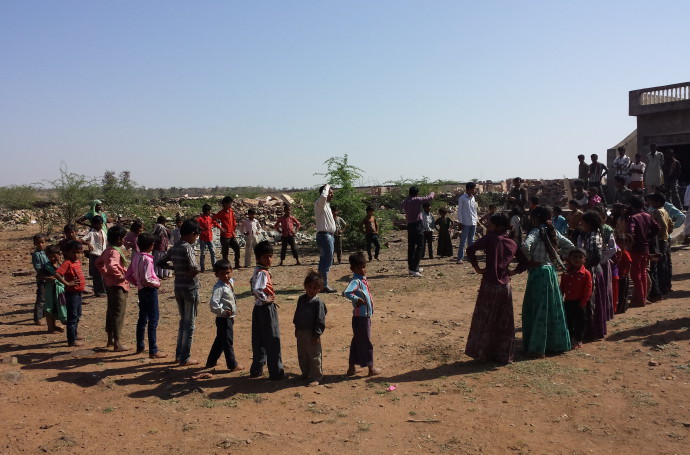 Hello, my name is Bram Callewier, Director at Stoneasy.com, a natural stone importer.  Welcome to the first part of a 6 part blog series where we talk about child labour in the stone industry.  Everyone involved in natural stone will have heard about how children are involved in its production.  The truth is that yes, they are, and especially in certain activities such as cobble making.  But what’s really happening in these remote parts of the world, far away from our professionally designed gardens, what’s the real story?  This blog aims to educate people on the root causes of child labour and to share some of the truly inspiring community led projects, working tirelessly to tackle this and other related social issues.  What you read won’t always be pretty, but we promise it will be the truth and we guarantee it will be written impartially.

On January 1st, 1995 India became a member of the WTO and opened up its borders for free trade. Western corporates embraced the idea of globalisation and flocked eastwards to either outsource production or, as was the case with natural stone, to look for cheaper alternative products. Most of us, business men, had hardly any idea about how these mysterious stone products were being produced, let alone being sourced. Meetings were held with middlemen in offices & hotel lobbies and mostly discussed price, volumes and lead time.  Ethics were not on the agenda at this early stage

At the same time, the inflow of cheap goods was embraced by western consumers and products, like natural stone, that for the majority of people were previously unattainable, were now affordable and accessible. Take a garden patio. Before 1990, natural stone was mostly sourced locally and its access limited to the happy few who could afford it. Nowadays, you can buy quality Indian Sandstone for less than £ 25 per m2!

However, over the last decade, it has become apparent that not everybody in the supply chain benefits from this free trade movement. Workers in vulnerable positions were being exploited and a lack of legal compliance in sourcing countries meant that Western companies were facing a harsh reality: as much as we invested in socially responsible UK & European business operations, our ethical credentials would only ever be as strong as the weakest links in our foreign supply chains.

I was confronted with this reality for the first time in 2009 when I visited Budhpura for the first time.  Located near to Kota in the state of Rajasthan, Budhpura is home to the Indian Sandstone Cobble Industry and is a key sourcing area for Beltrami. I had long heard the reports of child labour taking place here and even though until now I had never witnessed it with my own eyes, it wasn’t difficult to believe the claims. I set out to find out what was happening and I quickly discovered that in many cases children were aiding their parents in the production of sandstone cobbles and, on some occasions, were even fully ‘enrolled’ into the local cobble workforce.

Discussions with suppliers over stopping the use of child labour ended nowhere because they are not the ones in control of it. See, you have to understand that cobble-making is not an activity that tends to happen in clearly confined factories/yards. Most of it is done at the edge of quarries or even at home. In many cases, piles of stone waste are dropped off outside family homes and, using a hammer and a chisel, the waste stone is re-worked into sandstone cobbles of the desired size and finish.  In many cases multiple members of the same family will be involved in the production process.  Finished batches of cobbles will be collected at the end of the day and sold to local cobble traders.  While these local traders more or less control the cobble market, they do lack one important thing, the capacity to export. That’s where our suppliers step into the picture.

The first question you may ask is that why, as socially responsible businesses are we continuing to procure these products? The answer is very simple: because it would be irresponsible to walk away from a problem partially created by your own demand for the product. Taking the decision as an individual company would prove futile, as others would fill the gap as long as there is a demand. But if the industry as a whole stopped procuring this product, it would leave the workers and their families in most cases worse off. In a remote village like Budhpura job alternatives are usually limited to farming.  It’s also worth noting that child labour is a Pandora’s Box, once opened a whole depth of other social issues like alcoholism, domestic violence and occupational health issues are revealed.

Instead, we decided to look for help and expertise in tackling child labour from the root. Not an easy task and one that requires lots of effort and a combination of different approaches.  Over the years, my experience in the field has taught me that as guests in foreign countries we can only support locally driven initiatives.  What we needed to find was an NGO who were working on the ground in Budhpura.  About the same time we started talking to ICN, a Dutch NGO and a member of Stop Child Labour, who had already reported on child labour in the production of cobble stones in 2005 (www.indianet.nl/budhpura.pdf).  ICN linked us up with Manjari, a small NGO based in the heart of the Budhpura community.  Manjari were already deeply involved with the local community, more than anyone they were aware of the impact child labour was having around Budhpura and the myriad of other closely linked social issues.  As part of the community, Manjari were perfectly placed to lead any community based initiatives to tackle child labour.  Additional support was provided from the MV foundation who provided Manjari with training and guidance.  By the end of 2013 an exciting project was launched in the villages and hamlets around Budhpura.  The ambition of the project was to create small geographical areas where child labour was rejected by all stakeholders in the community, Child Labour Free Zones (CLFZ).  The message was very clear and unambiguous, with no if’s, but’s or maybe’s;  all children must attend school.

Soon after, UK stone supplier, London Stone joined us and the project has now expanded to cover the whole of Budhpura village and surroundings. Thanks to the hard work of Manjari’s volunteers, the people in Budhpura have a renewed sense of hope and dream of a better future, especially for their children.

In next month’s blogpost, we will be hearing from London Stone’s managing director, Steven Walley.  Steven will explain in detail how Manjari is working with the community to bring about a positive change in Budhpura. In meanwhile, enjoy the regular updates that Manjari will post of their on-the-ground activities.